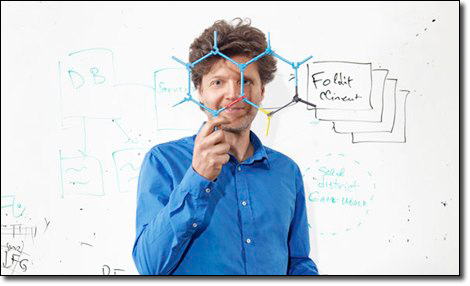 Okay, the headline's unnamed scientists did not specifically say that the idea for the FactMiners social-game ecosystem we're developing as part of The Softalk Apple Project is a great idea. What they are saying is that game-powered crowdsourcing methods are a tremendous resource for doing real and important science research.

In today's world where pure science and many domains of research are financially challenged, getting gamers to have "serious fun" helping with underfunded research activity is a win-win for sure. But beyond creative financine, many scientists are also finding that social games with a "serious fun" side can be a great way to engage the public; a great way to have science be something 'we' do rather than something 'scientists' do 'over there' (and without 'us'). More win-win.

You don't need me to fill you in further, simply check out this exciting article at The Guardian and Observer website, 'How online gamers are solving science's biggest problems'. The column's author, Dara Mohammadi, has thoughtfully provided an excellent overview of this exciting gaming trend and then profiled ten examples with links to on-line games where you can help do serious scientific research by playing games. 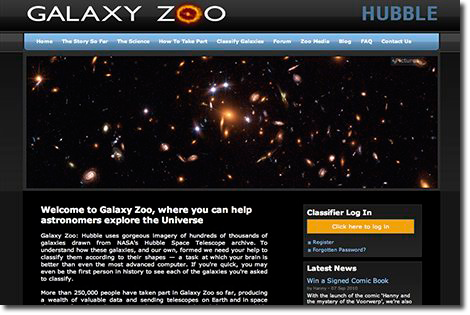 This article gives me the proverbial goosebumps. It affirms my personal belief about the potential for the FactMiners social-game ecosystem to be my "pay it forward" tribute in honor and recognition of the importance of Softalk Magazine. This article – and especially the games and associated projects to which it links – provide context for what we're doing here to create the first FactMiners Fact Cloud as a companion to the on-line digital archive of Softalk Magazine. It is also good context to justify the excitement I feel about the ideas captured in the thread of blog posts looking at the potential to create FactMiners game plug-ins to build a Fact Cloud for the million-plus Public Domain Image Collection of the British Library.

If FactMiners sounds like it might be an interesting idea to you, by all means check out this article. In the meantime, I have to get back to writing an entry for the Neo4j's January GraphGist Challenge. I am writing a piece to explore the embedded metamodel subgraph design pattern used for "self-descriptive" Fact Clouds that are part of the FactMiners social-game ecosystem.

As our grassroots Citizen Science/History projects (SoftalkApple.com and FactMiners.org) evolve, too much of my time is spent holding the SPAMbots at bay while still trying to be available for actual visitors and legitimate content contributions.

Given your general interest in crowdsourcing, I would like to bring your attention to the well-funded, but to me too-limited, research agenda afoot at www.SOCIAM.org. This is the U.K.-based the "social machines" research agenda initiated by evocative comments by one of its principle investigators, Sir Tim Berners-Lee of Internet-innovation fame.

One of the "slippery slopes" for crowdsourcing lies in the "Forest and Trees Syndrome." That is, there is a tendency in many crowdsourcing research/business-model designs to see the "crowd" more as a "forest" of interchangeable, "low-information" minions rather than as "empowered-tree" systems. By that I mean that the design of software systems in many crowdsourcing applications aims for "collective intelligence" of the "crowd-owner" which is most often organization-centric rather than personal-empowerment centered.

What we are trying to focus on in the FactMiners social-game platform is an agent-based "software exoskeleton" of the Empowered Individual rather than an organization-centric focus of typical crowdsourced workflows. Along these lines, and although I have not yet written much about this to avoid the complexities of explaining early-on, we want FactMiners' game players to not only contribute LOD (Linked Open Data) to the LAMs (Libraries, Archives, and Museums) which host a FactMiners Fact Cloud companion to their digital collections, but we want FactMiners' players to be able to create their own, Personal Fact Cloud that helps to organize and actively-evolve the player's own knowledge and interests.

That is, I believe the 21st Century Empowered Individual will -- without getting all deeply/weirdly philosophical about it -- have both traditional "wetware" perception and memory faculties as well as their digital extensions (AKA, the agent-based software exoskeleton).

Again, thank you for visiting. If you have not visited www.FactMiners.org, please do. You will find much more content there related to our applied R&D agenda that complements the mission of The Softalk Apple Project.