When I surfaced the boxes of Softalk magazines that now form the core of The Softalk Apple Project source material, one box contained some extra goodies. The most unusual item was a still-unseparated printout of the prologue to a cover story I'd written literally 'on the road' for Softalk. Not Kerouac-style on the road; my model was 1970's icon Charles Kuralt and his 'On the Road... with Charles Kuralt' stories on the CBS Sunday Morning television show. In Part 2 of this 'More to the Story' story, you'll learn just how hard it was to 'go mobile' in 1982. (Here's Part 1 if you missed it...)
--Jim-- 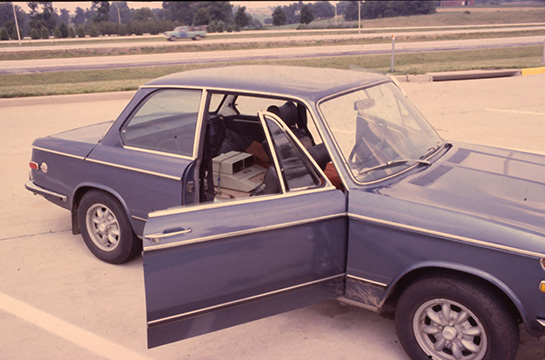 Softrek – to the best of my knowledge – was the first fully-functional, computerized mobile editorial and business office of a nationally published magazine. Here's what Softrek was and how it happened...

With two amazing "burn bright, burn fast" start-up ventures behind us, my business buddy Dave "Bear" Fitzgerald and I were at a "Now what?" Moment on a steamy, hot Baltimore Summer afternoon in 1981. I wistfully proposed, "Hey, Bear, would you go On The Road like Charles Kuralt if I can talk Al and Margot (Softalk owner/publishers) into letting us do it?" Bear halfheartedly said, "Sure." So we mustered our dwindling resources and made it to the upcoming AppleFest in New York City where Softalk had a major booth and media presence.

During a seldom-quiet moment, I made the Softrek pitch and to our surprise – I was hopeful but pleasantly shocked while I believe Bear was just blindside WTF-shocked – Al said yes... with a caveat. When we came off the road, we had to relocate to southern California where I would become Director of Marketing for Softalk Publishing and Bear would be another much-needed creative staff super-techie to help Softalk handle its then explosive growth. 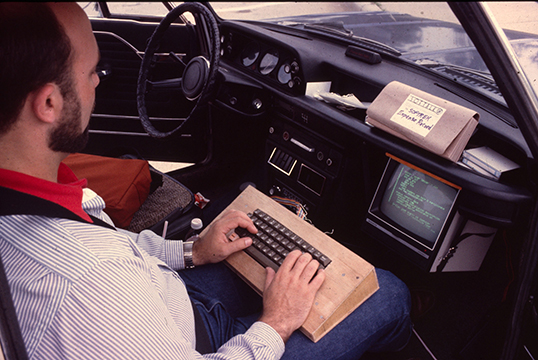 With that bold and much-appreciated "Yes," the Softrek game was afoot!

The idea was to be more than simply an in-the-field writing resource, we were Softalk Ambassadors of Good Will and Cheer. Once on the road, we visited local computer stores and user groups. We visited advertisers and pumped them up about what was ahead for Softalk, etc. And, of course, we got to write some great stories about all sorts of amazing people doing cool stuff with Apple computers, both maker/producer and user/consumer stories. I am forever grateful to Softalk Publishing for letting me and Bear have this wonderful adventure. But the real amazing part of this story – no, make that the truly incredible and unexpected part of this story – is what we had to do on the technical side of things so we could fulfill our mission. (It was one of those, "Be careful what you wish for, you might get it" kind of situations...)

In 1981-82 there were no portable personal microcomputers commercially available. There may have been prototypes and high-end stuff I don't know about. I mean there were no self-contained, battery-powered personal computers that we would recognize today as laptops. Only Trekkies would imagine tech that we now know as tablets, smartphones, and all the other digital gadgets of daily life. There were 'luggables' – microcomputers built into a rugged carrying suitcase – but the assumption of the designers of first generation consumer microcomputers was that you'd get somewhere, unpack, and plug in. So here's what we had to do to 'go mobile' in 1982... 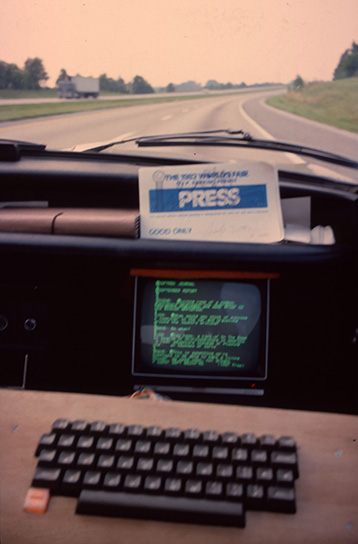 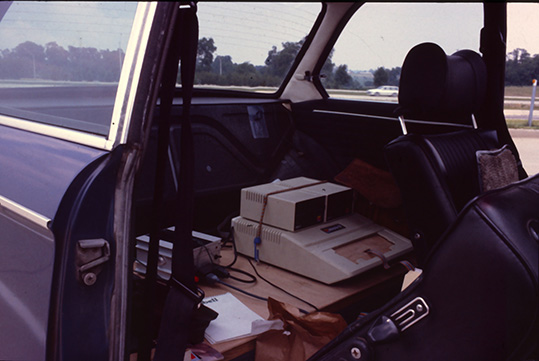 As crazy as it sounds to us today, this is what we had to do to 'go mobile' in 1982. In the first part of this More to the Story story, you can read a previously unpublished prologue to the Knoxville World's Fair cover story article written while On the Road as Softrek....

Thanks for being our first commenter!

I knew you would be a Kindred Spirit of this project based on the fun and insightful comments you make on the Softalk Forever!!! Facebook page. As I wrote this up, I was amazed to think about how utterly challenging it was to "go mobile" in 1982.

Here's a quick memory that didn't make it to the story... We learned to write a story in LOTS of small files since "speed of saving" had to weighed against the chance of hitting bumps in the road or going around a corner! Floppy disks and disk drives were certainly not designed to go mobile! :-) Before we could submit a story by modem, we'd piece it together from all its constituent "road files."