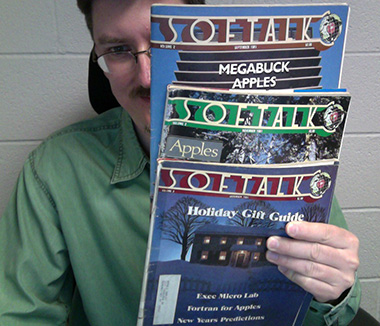 "I'm delighted to have discovered this preservation effort for Softalk, and happy that I'm able to contribute to it." said John Gruver from his home in the beautiful Shenandoah Valley of Virginia, "Of the panoply of personal-computer magazines that home users of all machines enjoyed from the '70s through the '90s, none came anywhere close to Softalk's success in creating and sustaining a warm and exciting feeling of both community and family. I'm quite pleased that it will be preserved and propagated so others may enjoy it as much as I have." 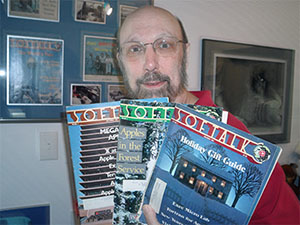 When John contacted me to offer the donation, I was amazed to learn that he is a "post-publication" lover of Softalk. You see, John is an avid collector of early microcomputer magazines. And I mean an avid, serious mega-collector. John has over 3-million pages of early computer magazines. He somewhat reluctantly admitted to me that he had grown up using non-Apple computers. So he wasn't a "hot off the presses" reader of Softalk when it was published. He discovered Softalk after-the-fact and read each issue like the serial publication of a fascinating multi-threaded novel. He recognized, even after-the-fact, how Softalk oozed community and brought together producers and consumers, young and old, suits and geeks.

I think John's reaction speaks directly to what so many of us know. Softalk magazine was simply more than a magazine. Softalk was the most vital communication link within the broad social network of microcomputing's producers and consumers of the time. This meant that Softalk significantly helped shape and accelerate the microcomputer revolution, not just report on it. I believe as the full collection of Softalk magazines go on-line and we build the FactMiners "Fact Cloud" companion database, we will see that such statements are not hyperbole.

Thank you, John, you donation is most welcome. We look forward, just as much, to your continued interest and participation in our project.